Just had a really weird dream about my boss's father.

We were walking along talking, and we was discussing an issue he was having with his home office. Frankly, it sounded like something I couldn't help with, so I told him this. He paused for a moment, then looked at me with some malice and said, "I'm on to your bullshit."

I assured him that I wasn't trying to dodge the issue, but said I'd be glad to drive out and have a look. I didn't think he was going to take me up on this offer, but he did. It meant shutting down this kiosk I was operating. It was like a framed building with security siding that slid open on all 4 corners - it was actually the local plant nursery, now that I think about it. There were PoS terminals in each corner. I went about shutting them down and locking down the building, when a co-worker came up and asked what I was doing. I kind of explained - and of course, the coworker wasn't happy. It had begun to rain too.

I went to get my car and follow the boss's father out to his house. As we walked, I asked him what he was going to drive. He showed me an immaculate car, rose colored, in a large, glass walled A frame showroom. It was a pristine classic Lincoln or Thunderbird wagon.

We were discussing the car, and what a beauty it was - when he suddenly started speaking in a different tongue. It didn't sound like nonsense, but it didn't sound like any language I've ever heard. The language sounded agitated though. I became concerned for him, and I called two of the women who worked for him. They restrained him, told me my concern for him was valid, and that he would be taken to the hospital.

Here is where the dream got really strange. After they left, I found his son and he wanted to be taken to visit the hospital. We had to go on foot down this treacherous jungle path. For some reason, I had to carry him piggy back. In the dream, he was not an adult. He was a young kid. Along the way, he became resistant.  I found myself dragging him down the trail. There was a stream alongside the water, and I let him fall into it. He couldn't pull himself back out. I pulled him from it and told him he had to stop fighting me or I couldn't help him. He agreed and we walked on.

Then we came to a village. There were beings there that were more like orcs or brutes than humans, and children with strange uniforms and helmets on. As we walked through this village, I noticed that the children were all in some sort of combat training. The helmets could be activated into mind control devices, and the children were all sparring with one another. I became very concerned for my traveling companion and had a sense of urgency. I knew we had to get through this village as quickly as possible. Before he was noticed.

Then I woke up, considered trying to fall back asleep, and realized sleep wasn't going to come back for me for a while.

So I decided to check the BBS, which still hasn't had a log in. I suspect it is broke. I think a previous client of the company I bought this static IP address service from has an MX record pointed at this IP address still. I suspect that is causing all of you to have trouble resolving to the BBS.

So for now, The Sanitarium is just a personal dream journal for dreams that read like Revelations style visions.

Another very weird dream tonight. Don't even know where to begin to describe this one. It was a party, at a lodge, sort of, in Tahoe, sort of, and the forest was on fire. I don't remember the start of it already - but the fire was sparse, and only a few trees were lit, and we were pulling them down to prevent the fire from spreading. The tree I was standing next to had a large gully or hole on one side of it, and we had hid our stuff there. A Chinese guy stole someone's hash that was hidden there, and they ran off after him. It had a very hell like theme. It didn't seem BAD - but it wasn't a pleasant place, altogether. There were dogs there, and they were good dogs, so maybe it wasn't hell. My brother (who isn't with us) was there. I snubbed him. He didn't seem to really GAF. So... that seemed accurate. :) There were houses made of stone that were very small. I thought they were a tourist thing at first, but then I remembered people lived there. I've dreamt of going to THAT place before, I think.

Not sure what is causing these bizarre dreams. Woke up, and remembered that my Networking guy had told me there was a command I might have to reset occasionally if it doesn't stick to get online. Came down, ran the command, and the BBS is back up. Not sure if it was up before I ran the command or not. I should have checked BEFORE I did that. Might not be totally awake right now. But everything seems to be working, now. If I remember the entire story of the dream, maybe I'll describe it better, later. Maybe this isn't a paranormal room - maybe this is a Dreams room. 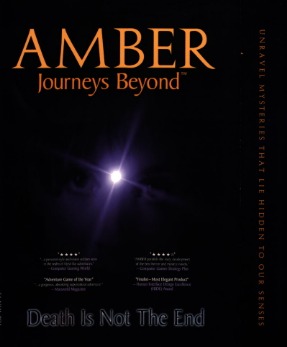 Thought this was "Amber, the chronicles of," and got very excited for a moment. I wish someone had made a real good CFRP of that universe. I do think it was an unsuccessful paper FRP at some point.

Yeah... it was a card game and diceless FRP.