The release of the popular Coffin Amiga OS image for V4, and its subsequent migration to MiSTer - has caused more interest in using SAMBA (SMB) on Amiga to move files from machine to machine. SAMBA on the Amiga has some limitations (the server you are connecting to must be a SMB V1 compliant machine, and modern Windows machines require SMB V2 by default). It is easy to set up your MiSTer as a SMB V1 machine as a file-share for other Amigas or a V4, and many NAS devices support SMB V1 by default or can also be easily configured to do so.

A reoccurring issue I hear people having is that SAMBA on their FPGA Amiga will not resolve SAMBA host file servers they know are on their network, and know are on the same subnet as their SAMBA capable Amiga. If you're using Coffin and MiamiDX (which you should be doing, Roadshow is priced too high and AmiTCP has its own set of issues,) the fix is pretty simple. Credit for reminding me about this goes to Eric Gustafson.

In Coffin, MiamiDX tends to run iconized and hidden beneath the task bar. The easiest way to bring it up in my experience is to go to Network on the top task-bar in Coffin and select "Online". 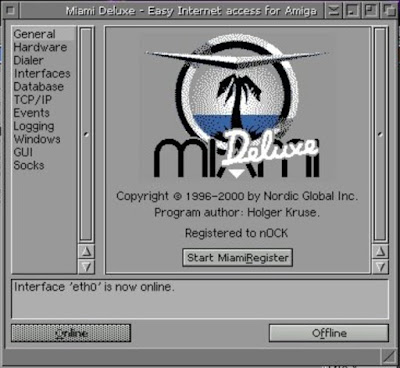 MiamiDX should appear. In the menu on the left, select "Database" 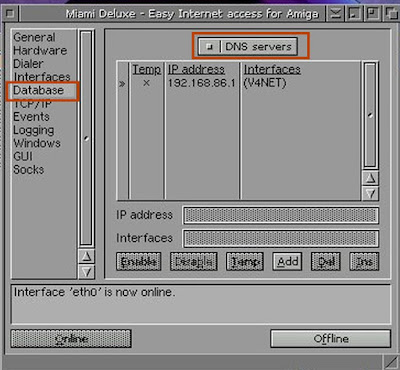 The Database window will default to "DNSservers" 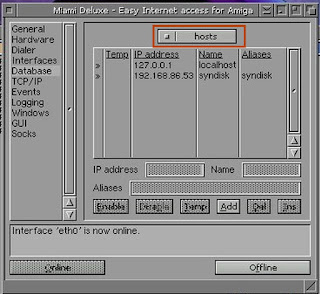 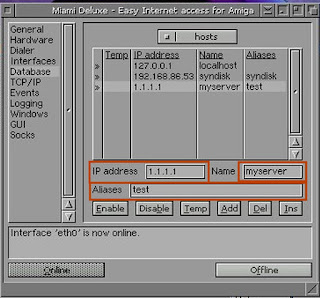 The fields will become un-ghosted. Enter the IP Address for your SMB server, the server name, and an alias. Hit enter and the host entry will be saved.

With MiamiDX still the active application, go to the Workbench top menu task bar, and select "Settings/save" to save your updated configuration.

Your SMB host should now resolve by name.